We have just release a new version of Docentric Toolkit. It has been a while since the last major public release. This version brings a lot of improvements in terms of new features and also existing features improvements such as better PDF rendering fidelity and various improvements in the Add-In for MS Word.

The new release features a completely new HTML engine which provides a much more complete HTML parsing and conversion from HTML to any of the supported output formats. The new HTML engine now supports many tags and their features that were previously simply ignored.

We also added support for CSS and full CSS style resolution. An HTML fragment that is inserted into a generating document can also define CSS styles and HTML tags can select them.

Consider the following HTML fragment that gets inserted in the generated document using a Sub Document tagging element: 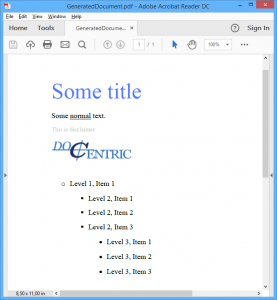 Saving large documents can take a lot of time. If you have ever used Docentric Toolkit’s DOM APIs for conversion of big Word documents to PDF, then you probably know that conversion can last for minutes or even longer.

Some of you asked us to implement a progress notification mechanism that could be used to show users the save progress, for example in the form of a progress bar.

The answer to this requirement is a new event Document.SaveProgressChanged. If you subscribe to this event and then call Document.Save, you will be receiving progress change notifications which you can use, for example, to update a progress bar:

Note that the Document_SaveProgressChanged handler call is not automatically marshaled to the UI thread and must be done in the handler.

Currently, you can only use Docentric Toolkit in a .NET Framework projects. But this is going to change very soon. Version 5.1 is most probably the last 5.x version. The next public release will be 6.0 and it will add support for .NET Core.

A public pre-release version will be available soon. If you would be interested in trying it out, please drop us an email, and we will get back to you once the pre-release will be ready.